This is Aladdin, a male brown-throated three-fingered sloth that fell from a tree after losing a fight with another male. He sustained minor injuries from the fight, but otherwise seemed very healthy. Hair samples were collected from his back and a tracking collar was put around his neck so that we can find him again when I return to Costa Rica this summer!

Sloths have skyrocketed to favorite animal status for many Americans due to adorable videos, viral memes, and spotlight roles in commercials and films like Zootopia.  But why are they so popular? Is it their cute faces with permanent smiles?  Or their relatable “lazy” demeanor (I prefer to call them “energy-efficient!”)?

I’m a Masters student in the Hom Lab and was drawn to sloths because of their unusual behavior and ecology. There are two types of sloths — two-fingered and three-fingered — that diverged about 40 million years ago and display unique convergent evolution. Both sloth types have incredibly low metabolism, altered anatomy for efficient life in the canopy of trees, interesting bathroom habits (ahem), and a diverse array of microbes and arthropods living in their fur. They also have unique cracks in their hair that seem to aid in algal growth, giving the sloths a greenish color. Although historically thought of as a camouflage benefit for sloths, there seems to be a serious lack of evidence, showing green fur benefiting sloths in this way. Other scientists claim that there’s a three-way mutualism between sloths, algae, and moths that live in their fur. The idea is that fur-residing moths lay their eggs in sloth poop when the sloth descends to the base of a tree once a week to relieve itself; then they fly back up to a sloth and deposit nutrients on the sloth fur to fuels algal growth; the sloth presumably benefits from all this by eating their fur algae as a nutritional boost — but sloths don’t lick themselves or show any behaviors that can be interpreted as eating algae from their fur, so I’m not so sure about this part.
But I’m determined to answer some of the lingering questions regarding the sloth hair microbiome.  In January, I traveled to Costa Rica to study brown-throated three-fingered and Hoffmann’s two-fingered sloths in collaboration with Sam Trull at The Sloth Institute of Costa Rica (http://www.theslothinstitutecostarica.org/). I climbed trees, caught sloths, and collected hair samples to begin to answer questions like: do sloth-associated algae also grow on the leaves of the trees that the sloths may be eating? Does the composition of the hair microbiome change depending on the season ? Does a “greener” sloth mean a healthier sloth?
Sure, sloth’s are cute and highly relatable, but their biology is super fascinating and strange as well!  Perhaps the next time you see a sloth on your Facebook feed or in a commercial, you’ll appreciate them for their unique biological characteristics that make them true wonders of nature.

We have discovered a new symbiosis, based on nutrients exchange,
between a plant-like microbe –Chlamydomonas- and
a plant growth-promoting bacterium –Methylobacterium-.

You must have heard about it: World population is expected to reach 9.8 billion in 2050, according to the last United Nations report. By that time, we need not only to at least double crop production, but to do it in a sustainable way if we want to feed humanity. For that, research in agriculture becomes crucial. The main focus in our research group is to study the metabolism of the most important nutrient in quantity for plant growth: nitrogen. This knowledge can be highly helpful to develop more efficient and sustainable crops.

Instead of working with land plants, we use a plant model organism that is unicellular, fast-growing, easier to handle and to genetically modify, and thus, easier to study: the green microalga Chlamydomonas. This alga has been extensively studied for more than 50 years helping researchers to better understand the physiology of not only microalgae, but also of higher organisms including land plants.

“The most exciting phrase to here in science, the one that heralds new discoveries,
is not ‘Eureka! (I’ve found it)’ but ‘That’s funny…’
– Isaac Asimov

During our study in nitrogen metabolism we discovered that, like plants, Chlamydomonas cannot assimilate some organic nitrogen compounds (e.g. some amino acids and peptides). Unexpectedly, one of our algal cultures was accidentally contaminated. Even though contaminations are in most cases truly annoying, I had a different feeling that time, that was funny: that contamination allowed the alga to grow on one of those organic compounds it was not able to use by itself. We found this fact definitely interesting and worthy to further investigate.

However, we were not familiar with symbioses so we decided to contact Erik in the Hom Lab, who demonstrated a symbiosis between this alga –Chlamydomonas– and a yeast -like the one is used for making bread or beer-. In his work at Harvard University (Cambridge, MA) he showed that both microbes exchanged nutrients creating a stable symbiosis. At that point, we started an exciting collaboration to figure out who was allowing Chlamydomonas to grow and how. I spent 4 fun months in the Hom lab –such an adventure!-.

It turned out that the contamination was a Methylobacterium species. These bacteria are present on the surface of many land plants. What do they do there? They are not pathogenic, but right the opposite. In a somehow similar way our gut bacteria play a fundamental role in human lives keeping us healthy, plants have established as well mutualistic relationships with bacteria. Thus, plants are surrounded with bacteria that benefit them, and so it is said that ‘plants wear their guts in the outside’[1]. Among these let’s call them ‘plants-gut bacteria’ there is an important group of bacteria named methylobacteria, like the one we hunted in our algal culture. These are pink bacteria well known to improve plant growth in different ways such as inhibiting plant pathogens growth, degrading toxic compounds or breaking down complex nutrients transforming them into simpler molecules that plants can assimilate.

Then, as methylobacteria benefit plants, it was not surprising that these bacteria were helping this plant-like microbe Chlamydomonas as well. But, how was it allowing algal growth? Since the alga was not able to grow by itself on these complex compounds such as the amino acid proline, we assumed the alga could not use it as a nutrient for growth. This amino acid was the only carbon and nitrogen source added to the medium, both essential nutrients for growth. Therefore we assumed the alga must have been lacking at least one of them.

What nutrient was this alga missing? Since algae are photosynthetic organisms, they can use atmospheric carbon dioxide. Then, carbon did not look like the limiting nutrient. Therefore, nitrogen seemed to be the missing nutrient in the culture, and thus, the most likely nutrient bacteria was providing to the alga. As expected, we discovered that bacteria were releasing ammonium, an inorganic form of nitrogen algae can very efficiently grow on. Hence, these bacteria were breaking down complex nitrogen compounds feeding algae with simpler forms of nitrogen allowing its growth.

But, part of the mystery was still unsolved: were bacteria getting something back from algae? And if so, what was that? As most symbioses examples in nature, it seems likely that not just one but both partners get benefit from the symbiosis. Then, what could this alga provide to bacteria? Well, we know that as a consequence of photosynthetic metabolism in algae, organic carbon compounds are generated and can be released to the medium as waste products. Then, just like bacteria were making nitrogen accessible to algae, algae might be making carbon available for bacteria, we thought. After looking into the algal media we found out Chlamydomonas was releasing glycerol, a carbon compound that these bacteria can use as a carbon source to grow.

Thus, we discovered a new mutualism between green microalgae and pink bacteria in which a carbon-for-nitrogen exchange may take place in natural environments where inorganic forms of nitrogen are limiting but more complex nitrogenous compounds are present. Thus, we have found that these bacteria that are well-established benefiting plants are also benefiting green algae, which are the land plant ancestors. This information has a substantial potential in agronomic and evolutionary applications. Not only that, but also this new algal-bacterial system has a great potential in biotechnology since both organisms are already used separately in different applications that may lead now to new applications. In conclusion, the study of this interaction may reveal new keys about the rules that govern natural systems that can be used in our own benefit.

“Luck is what happens when preparation meets opportunity’
– Seneca

You can learn more about this new symbiosis in our research paper: A new mutualism between Chlamydomonas and Methylobacteria facilitates growth on amino acids and peptides. 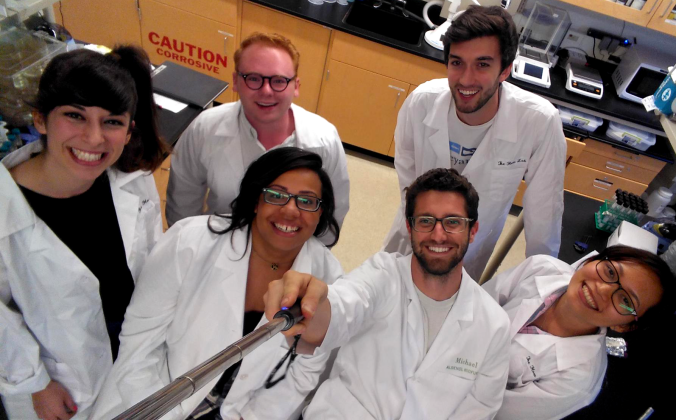 Because moving for work for a few months 7,341 km away from home, where none speaks your mother language and where everything is so, so different, can be hard… I just want to thank you all. You made it so easy. You made me feel at home since the very first moment I got there.

I honestly enjoyed every single day working in the lab, even when I couldn’t understand a word-so many ‘what?!’s-or when nothing worked-because ‘nothing is ever easy’-. If my bugs were not growing at all, because they were napping; if the cultures got contaminated, because they were just looking for friends; if the machines were not working, because they just decided to take some days off; or even when the power went off forever while we were finally about to run the first qPCR (`come on!’), everything was totally fine and fun in all your company.

Thanks Erik for hosting me and my pink bugs in your little cozy bubble, for your patience, for making me think, dream, do science and asking ‘so what?’ and ‘who cares?’

Hi! I’m Jessica a.k.a. “Mom” and this is my first post on the Hom Lab Blog and it will be short and sweet. All one really needs is a just a taste to wet the appetite. Hold your breath, count to three… and here we go! My project focuses on a naturally occurring microbial symbiosis of various bacteria and yeast that are embedded in exopolysaccahride globs and ferment sugar solution. I’m working on defining optimal media, extracting DNA, and typing the microbes. Yep, short and sweet like I said; just a taste.

So in the near future I will keep you updated on all the haps with my grains and any tips, issues, comments or relevant literature to my project.

Hello! This blog will feature posts from our researchers in our research endeavors which include:

We hope you will find these posts useful, informative, and interesting. Feel free to contact us at anytime using the information provided on the Contact page or visit our website . Enjoy!